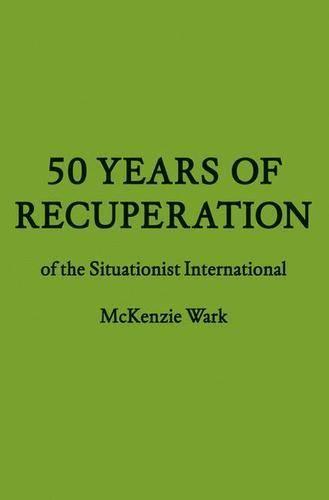 50 Years of Recuperation of the Situationist International

FYI from Wikipedia): The Situationist International was a small group of international political and artistic agitators with roots in Marxism and Lettrism. They played a central role in the theory underlying the 1968 European uprisings. They managed to use public money to publish Mustapha Khayati's pamphlet On the Poverty of Student Life and distributed thousands of copies, making the Situationists well known throughout the nonstalinst left. They were among the occupiers of the Sorbonne and defended barricades in the riots. A pointed, original, and engaged investigation of what remains vital in the endlessly provocative legacy of the Situationist International (SI) 1957-1972, one of the most important and political avant-garde groups to emerge after World War II; and how this might open the way to new practices in today's digital culture. Reassesses some of the lesser-known figures and projects that emerged from the Situationist movement, including the contributions of two women, Michele Bernstein whose "strategic novel, Tous les Chevaux du Roi (All the King's Men) about her relationship with Guy Debord has recently been reissued in France, and Jacqueline de Jong, founder of the Situationist Times. This book gathers carefully selected images of the Situationists and their work, including vintage photos never published before, as well as work by contemporary artists and groups inspired by Situationist ideas, such as the Bernadette Corporation and the Radical Software Group. A part of the FORuM Project Publication series published in association with the Temple Hoyne Buell Center for the Study of American Architecture at Columbia University.