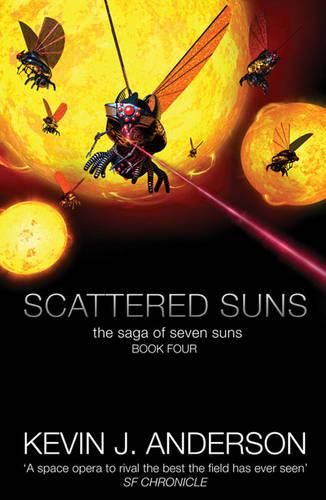 The title reveals the fourth momentous event in the 'SAGA OF SEVEN SUNS' space opera series.

The destructive hydrogues continue their war against humans and the fiery entities, the faeros - a struggle that kills planets and extinguishes whole stars. Newly crowned Mage-Imperator Jora'h, the leader of the ancient and vast Ildiran Empire, struggles with new knowledge he has learned: an ancient bargain and long-standing treachery that may finally bring peace with the hydrogues ...though it could mean the extermination of the human race. But Jora'h's empire is destroying itself from within, when his mad brother launches a bloody rebellion across the Ildiran planets, appointing Jora'h's own first-born son as its leader. In the Terran Hanseatic League, Chairman Basil Wenceslas continues his red-herring war against the Roamer clans, eager to achieve a decisive victory, even against a supposed enemy that poses no threat. Their homes destroyed, the wandering Roamers scatter into hiding, trying to keep their culture and government intact, even when faced with enemies from all sides. Cesca Peroni, leader of the Roamers, finds herself stranded on a small icy outpost where miners have uncovered a hibernating army of alien Klikiss robots. Once released, these robots trigger another dark and ancient plot, one that could lead to a massacre across all human-inhabited planets. In a galaxy torn by war, treachery, and shifting alliances, no one can know the truth about their friends or enemies.