Home > Shop > Other Non-Fiction > Biography, Memoirs, Letters > Toast: The Story of a Boy's Hunger (Stranger Than?) 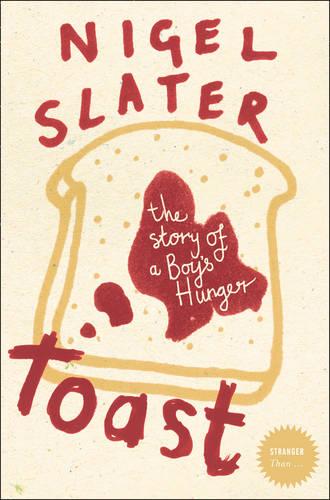 Toast: The Story of a Boy's Hunger

An autobiography of a top food writer. It details the food, recipes and cooking that have marked his passage from greedy schoolboy to great food writer. It is also a catalogue of how the British have eaten over the past several decades.

This is top food writer Nigel Slater's eat-and-tell autobiography. Detailing all the food, recipes and cooking that have marked his passage from greedy schoolboy to great food writer, this is also a catalogue of how the British have eaten over the last three decades. "Toast" is Nigel Slater's truly extraordinary story of a childhood remembered through food. Whether relating his mother's ritual burning of the toast, his father's dreaded Boxing Day stew or such culinary highlights as Arctic Roll and Grilled Grapefruit (then considered something of a status symbol in Wolverhampton), this remarkable memoir vividly recreates daily life in sixties surburban England. His mother was a chops-and-peas sort of cook, exasperated by the highs and lows of a temperamental AGA, a finicky little son and the asthma that was to prove fatal. His father was a honey-and-crumpets man who could occasionally go off 'crack' like a gun. When Nigel's widowed father takes on a housekeeper with social aspirations and a talent in the kitchen, the following years become a heartbreaking cooking contest for his father's affections. But as he slowly loses the battle, Nigel finds a new outlet for his culinary talents, and we witness the birth of what was to become a lifelong passion for food. Nigel's likes and dislikes, aversions and sweet-toothed weaknesses form a fascinating and amusing backdrop to this incredibly moving and deliciously evocative memoir of childhood, adolescence and sexual awakening.

'Acutely observed, poignant and beautifully written!Slater tells his heartbreaking story with great subtlety. The theme of food and love is a fascinating one and I have never seen it better handled.' Daily Telegraph 'Few, if any, food writers engender such affection as Nigel Slater. He evokes time, people and place with!unmatched sensuous energy!Extraordinary.' Observer '"Toast" is a magnificent reminder of!food in family life.' Lynne Truss, Sunday Times 'A talent for prose as simple and pleasurable as his recipes.' Sunday Telegraph 'Moving, funny and finely crafted, it's a real gem.' Independent 'It achieves a remarkable freshness![and] reveals a gift for doleful, Alan Bennett-like comedy.' Guardian 'This book should be treasured for its prose!and for its vision of a world seen through the senses.' Independent on Sunday '[A] touching odyssey through childhood tastes, treats and tortures !' Sunday Times 'Toast is served up with seasoning and flair ! Vivid and moving.' Observer