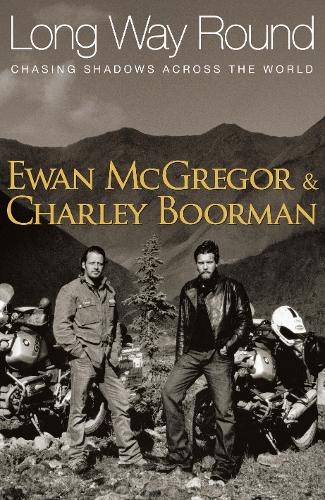 Film star Ewan McGregor travels around the world by motorcycle with his best friend, actor Charley Boorman - a unique and fascinating travel/adventure book

In this highly entertaining book, fellow film actors and bike enthusiasts Ewan McGregor and Charley Boorman travel 20,000 miles around the world by motorbike. They will encounter many troublesome situations on the way, ranging from extreme and threatening weather to impenetrable terrain, and will face challenges such as caviar fishing in the Caspian sea, wrestling with the Mongolian Olympic team and riding with the Canadian Mounties. Whilst throwing themselves enthusiastically into the culture of each new country - from Alaska to Mongolia, from Canada to Kazakhstan - the two friends will also have to rely on each other's good humour, as the journey tests their relationship and their stamina to the limits. Long Way Round is the action-packed account of the trip and a true portrait of friendship in extremis - as irreverent, engaging and articulate as Ewan McGregor and Charley Boorman themselves.

Both McGregor and Boorman prove themselves to be engaging, articulate and entertaining narrators ... a highly readable and spiritually uplifting book about a dream come true WANDERLUST Touching and memorable ... one for armchair travellers and bike freaks DAILY MAIL Long Way Round is the tale of a remarkable journey taken (on motorbike) by two men. The fact that those men are figures with notable film connections (Ewan McGregor is one of Britain's most successful actors, Charley Boorman is the son of the celebrated director John Boorman) may be the reason the book got written - and the accompanying television series got made - but so what? This epic trip is conveyed with real elan by its two authors, and there are arguments for preferring the written word over the image: while the latter may convey the exhilaration of the journey more directly, the book is infinitely more subtle in presenting the mindset of its two (often-beleaguered) travellers. Their co-writer Robert Uhlig has cannily conveyed the similar (but at the same time, very different) personalities of the two men, and it's one of the pleasures of the book. McGregor, for whom motorbikes are as important as his acting career, was gazing at a map of the world when it occurred to him that it was possible to ride by bike all the way round the world (with just a smidgen of cheating around the Bering Strait), and he suggested over a meal with best friend and fellow thesp Charley Boorman, that the pair might chase their shadows from London to New York, across the Pacific to Alaska and other far-flung parts. Needless to say, catastrophe matches the adventure at every turn, and encounters with gun-toting Ukrainians, Mongolian Nomads and (most dangerous of all) ruthless paparazzi add to the stress levels. But the 20,000 miles covered by the pair, however arduou Barry Forshaw, AMAZON.CO.UK 'It's like Michael Palin but with added sex appeal.'