All About Aardvark... The History

Aardvark Books was founded in January 2004 by Sheridan Swinson and the late Edward Tobin, two career publishing professionals who decided to start a book business that reflected their love of books, and their combined half-century of experience in the book trade.

Begun in some disused pig sheds on the outskirts of Leominster in Herefordshire, Aardvark Books quickly moved  to Brampton Bryan where they found a home in one of the buildings on the Harley Estate, The Oxford Barn. In the autumn of 2007 they moved to their existing premises on the edge of the village in the old Manor Farm Buildings. In 2012 Aardvark added the BookBurrow – a specialist children’s bookshop – and the whole building now holds in excess of 50,000 titles, with new books arriving every day.

Following the death of Edward Tobin in 2014, the shop is now owned and run by husband and wife team Sarah and Sheridan Swinson. Sheridan worked in publishing for many years before starting Aardvark, whilst Sarah was a teacher – latterly teaching French and English at Elmhurst School for Dance in Birmingham, and French in local primary schools.

When Edward died, we both felt a great responsibility to continue  with Aardvark and to expand on the elements of the business that Edward most loved. Having the BookBurrow means that we have something for even the youngest customer, and in recent years we have also massively increased our selection of cards so that we now offer one of the widest selections available in the area."

The Aardvark Bookery (or Book Barn)

The Aardvark Bookery was created in the summer of 2007 from a nineteenth century farm building, on the historic Harley Estate in the village of Brampton Bryan, North Herefordshire. Using the services of craftsmen who lived and worked on the estate, a special space was designed, and nearly 4,000 square feet of space for books built. Previously the barn had had many uses, including being a grain store and turkey farm, but such was the quality of the original workmanship that little structural work needed to be undertaken during the conversion. Aardvark Books opened its new premises on 1st September 2007. Today, following the opening of the BookBurrow in 2012, the bookshop is over 4,500 square feet.

The village of Brampton Bryan is itself notable as being the scene of an important Civil War Siege of 1643 when Lady Brilliana Harley defended the nearby castle with 70 retainers against the onslaught of a large Royalist force who had marched up from Hereford. Aardvark celebrate the siege every two years with the help of the English Civil War Society who besiege a replica castle with cannons and muskets, demonstrate pike actions and set up a living history camp in the fields opposite the bookshop, under Harley's Mountain.

Two further rooms have been added to the Bookery, one containing a specialist children's book and play space called the BookBurrow, and the other a warehouse space that is used for pop-up markets, art exhibitions, music, poetry and other arts events.

The stock now encompasses over 50,000 titles - new, secondhand and rare - with outstanding selections in most categories including Art, Design, Cookery, History, Fiction and Local Interest. New books are added to stock every day, and the entire stock holding turns over every two years on average.

What makes working at Aardvark so enjoyable are the thousands of customers who visit us each year. Some are regulars, and live in the local area, and some find us from as far away as America and Australia. Many of them tell us how special they find the experience of visiting the shop, and how they value the opportunity to escape the cares of the modern world into a truly book-centred  world."

Surrounded by ancient hills, rolling pasture land, and numerous sheep and cattle, Aardvark Books is a unique experience for book lovers of all ages. 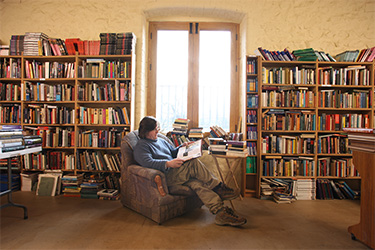 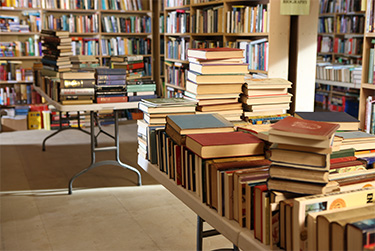