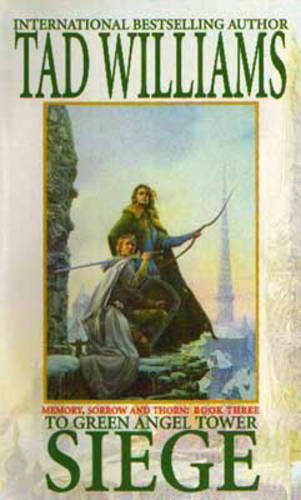 Simon Snowlock and Prince Josua's band of allies gather at the Stone of Farewell. King Elias is drawn ever deeper into the dark sorceries of Ineluki, the Storm King. The badly depleted League of the Scroll searches for age-old knowledge with which to aid Josua's much-outnumbered army. Across the face of Osten Ard lines are drawn as the final battle approaches, and the struggle between Light and Dark reaches a climax. SIEGE is the first half of TO GREEN ANGEL TOWER - an international hardback bestseller - the final volume of Tad Williams' highly acclaimed trilogy Memory, Sorrow and Thorn.

'I was rarely held so captive by a novel ...Williams is our Tolkien' Fear 'Epic fantasy you can get lost in for days, not just hours' Locus 'Tad Williams proves himself as adept at writing science fiction as he is at writing fantasy. Best of all, however, are Williams's well-drawn sympathetic characters ...' Publishers Weekly