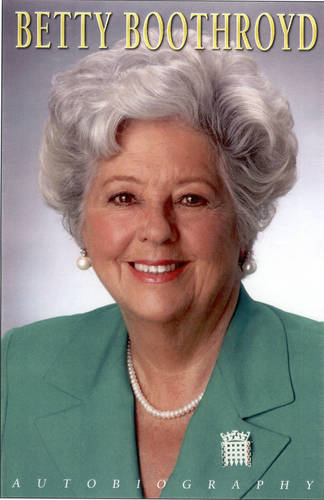 The first woman to be appointed Speaker of the House of Commons, Betty Boothroyd was once a celebrated "Tiller Girl". In her autobiography, she tells of her life, the times campaigning for the Labour Party, the times she lost two by-elections, and her elation at finally becoming an MP.

The enormous respect and affection of the British public for Betty Boothroyd has its roots in a strong belief in what she stands for: fair play, an unshakeable sense of honour and a passionate belief in the sovereignty of Parliament. Her convictions, she has said, are set in 'Yorkshire granite'. Born into a working class family in Dewsbury in 1929, there was little money, but Betty grew up in a home that radiated love and warmth. Betty popular and a talented dancer who went on, eventually, to become one of the celebrated Tiller Girls - the full story of which she tells here for the first time. But by the age of 25 Betty's dreams of taking the West End by storm had crashed - and her father's ambition of seeing her settled with a nice safe job had been abandoned. Undaunted, she won a national speaking award, stood for election to the local council and became a full-time worker for the Labour Party. Nothing would ever part Betty Boothroyd from politics again. In 1953 Betty began work at the House of Commons for Barbara Castle and Geoffrey de Freitas. She speaks candidly about the devastation of losing two by-elections and the time she spent in America campaigning for JFK. Back in Britain, Betty landed a top job with millionaire Labour Minister Lord Harry Walston and the Yorkshire girl became part of the inner circle of the socialist elite, including Hugh Gaitskell and Roy Jenkins. She describes the elation she felt on becoming an MP at last in 1973, the huge debt she owes her mother for her support, and the full story behind her role in the struggle to save the Labour Party from the hard left. Betty Boothroyd's long political career reached its apogee in 1992 when she was appointed the first woman Speaker of the House of Commons with overwhelming support from both sides of the House. Her term of office coincided with John Major's attempts to defend his slim majority. Detailing many of the true stories behind the headlines, she writes of the sleaze scandals that beset the Major government, her feelings when Labour won their landslide election in 1997 and her strongly held views on the role of Parliament. Finally, she tells why she decided to retire, her plans for the future and - in retrospect - what she feels about her decision to put public service above marriage. Written to appeal to the wide audience which has responded so warmly to her and to the values she represents. Betty Boothroyd's autobiography is destined to be an enormous bestseller.