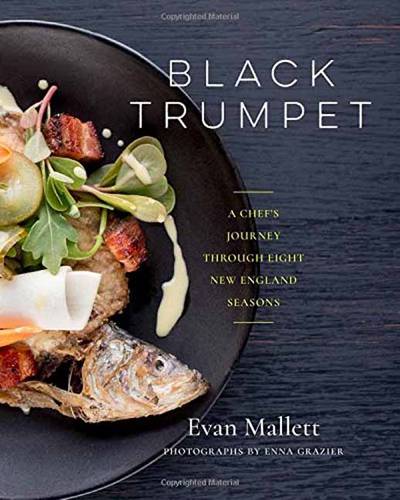 The basis of great cooking has always been the creative use of fresh, seasonal ingredients - whether the kitchen is at home or in a high-end restaurant.

At the renowned Black Trumpet restaurant, located in the historic seacoast city of Portsmouth, New Hampshire, Chef Evan Mallett and his staff reflect the constantly changing seasons of New England, celebrating the unique flavors and traditions of fished, farmed, and foraged foods in their ever-changing menus that rotate roughly every six weeks throughout the course of the year.

From deep winter's comfort dishes to the first run of maple syrup during Mud Season; from the first flush of greens in early spring to the embarrassment of high summer's bounty and fall's final harvest--Evan Mallett offers more than 250 innovative recipes that draw not only on classic regional foodways, but on the author's personal experiences with Mexican, Mediterranean, and other classic world cuisines. Recipes include inspired and delicious dishes such as:

Black Trumpet not only tells the story of a great restaurant--how the Black Trumpet became nationally famous as a model for local food sourcing and community involvement--but it also traces the growth and evolution of the local food movement. In some ways, it can be viewed as a how-to manual for building a community around good food, featuring not only creative and delicious recipes, but autobiographical vignettes, and sidebars containing technical how-to information, profiles, anecdotes, and essays.

In this cookbook, the trappings of technology are eschewed, and the bare-bones essentials of extracting flavor and combining both commonplace and unusual ingredients take center stage. Genuine flavor and hospitality are what set Black Trumpet apart, and this cookbook will reflect those special qualities and inspire a new generation of adventurous American cooks.

"With this book, I feel as if I'm right in the restaurant being happily taken care of by a devoted staff while Chef Evan whips up something delicious, local, sustainable, seasonable, with a touch of the exotic--all the things I need to delight my palate."--Nancy Harmon Jenkins, author of The Four Seasons of Pasta

"Portsmouth, New Hampshire's Black Trumpet is, according to one Boston Globe review, 'the kind of place where diners are apt to travel farther to get there than the ingredients do' Which speaks well of owner-chef Mallett's mantra of sustainability and the quality of food his kitchen produces. Mallett arranges these hundreds of recipes into eight miniseasons of ingredient availability, beginning with early winter and ending with late fall ("the final forage"). Thus, the first chapter features warm spinach salad with clementines, goat cheese, and pickled shallots, while late-spring recipes include crunchy garden radishes with malt aioli, tamari, and micro herbs. That 'final forage' includes a zesty apple chutney along with cider-braised pork osso buco. Mallett is one fine writer, both in relating Black Trumpet's story and guiding philosophy and in laying out his recipes, which are concise but so thoroughly and solicitously explained that even the timid home chef should be inspired to give them a try. With appeal and relevance extending beyond New England, this is a winner, every which way."

"Evan Mallett stealthily and humbly creates our regional culinary identity. His dishes honor our seasonal ingredients, but also give us a sense of adventure in exciting flavors and traditions from Morocco, Mexico, and India. This is the new, true New England cuisine. I'll make these delicious dishes season by season, but there are beautiful stories here, too, about farmers and fishermen, family and loyal staff--all part of the bigger story behind Evan's dedication to our Good Food Revolution."--Rachel Forrest, food writer and restaurant critic

"The only complaint I've ever had about Evan Mallett's acclaimed Black Trumpet restaurant is that it's too far from where I live for me to dine there as often as I'd like. With this book, I'm finally able to enjoy Mallett's imaginative, seasonal, and ultra-tasty food at home any time the urge hits--and it will hit often."--Barry Estabrook, author of Pig Tales: An Omivore's Quest for Sustainable Meat

"A wonderful culinary tour, both through the seasons and through an endlessly inventive and particularly New England kind of sense and sensibility."--Paul Greenberg, author of Four Fish and American Catch

"Evan Mallett is a well-respected food hero who lives and cooks in an edge of North America known more for its trying climate than for its bounty: harsh winters, short seasons, thrifty New England ways. And perhaps it is that very element that makes Black Trumpet so inspiring: the creative use of what's available in a part of the world where land meets sea; where eaters are only beginning to learn how best to orient their passion for the familiar with the wild offerings of the seasons.

"Evan's book is both a fascinating read and marvelously useful: Beautifully adorned with Enna Grazier's photographs, Black Trumpet serves as an inspiration and resource for the home cook who seeks practical tools for entertaining. While Evan's commitment to sustainability and cultivating leadership in the food community via Chefs Collaborative and Slow Food makes him a chef's chef, this book illustrates how, more than anything, Evan is a teacher and guide for cooks who create in their home kitchens."--Richard McCarthy, executive director, Slow Food USA

"Rare is the book that can both deepen your appreciation of tradition and open your mind to innovation, yet Black Trumpet seems to accomplish this on nearly every page. You think it's all been done, and then Evan Mallett shows you it hasn't. In a region swimming with farm-to-table chefs, Mallett has managed to break free and create something truly new--an original cuisine that tells the story of modern coastal New England in words, images, and an extraordinary palette of flavors."--Rowan Jacobsen, author of American Terroir and The Essential Oyster

"From the very first chapter, I was captured by Evan's knowledge of stocks, dressings, aioli, butters that have been browned, and all the necessary beginnings for the magical dishes this wonderful cook has fashioned. All through the book, from one season to the next, I was profoundly impressed by Evan's understanding of ingredients that bring more than one taste to your delighted mouth.

"There are three classic books for cooking: The Joy of Cooking, Julia Child's Mastering the Art of French Cooking, and The New York Times Cookbook. You only need to add one other now--Evan Mallett's Black Trumpet."--James Haller, founding chef and owner, Blue Strawbery; author of Salt & Pepper Cooking

"Mallett and his crew weren't quite sure who they wanted to be when they opened Black Trumpet in Portsmouth, N.H., in the spring of 2007. Today, they're the embodiment of the locally sourced movement, working with local farmers to craft terrific cuisine that speaks to the region and its history. Mallett shares over 250 recipes that make the most of New England's offerings, including chestnut butter and fig jam finger sandwiches, cider-braised pork osso bucco, and pork schnitzel with pretzel spatzle. The must-try snacks include pan-fried smelts with Meyer lemon and caper aioli, ceviche with pico de gallo, and the beautifully simple Chile Pasta, a from-scratch pasta dough that incorporates a trio of chilies to add smoke and warmth. The majority of the book's dishes are probably best ordered at the restaurant itself: potted fava bean pate with rhubarb gelee, saffron pickled quail egg with serrano ham and aioli in a phyllo nest, and fried rabbit loin with cheesy polenta pudding and rhubarb salsa call for more time than readers may have for dinner. Still, readers [are] sure to find some great ideas and techniques."