Home > Shop > Other Non-Fiction > Reference > The Prodigal Tongue: The Love?Hate Relationship Between British and American English 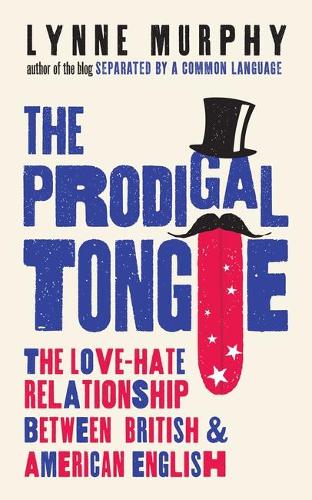 The Prodigal Tongue: The Love-Hate Relationship Between British and American English

'The first and perhaps only book on the relative merits of American and British English that is dominated by facts and analysis rather than nationalistic prejudice. For all its scholarship, this is also a funny and rollicking read.'

The Economist, Books of the Year

Only an American would call autumn fall or refer to a perfectly good pavement as a sidewalk... Not so, says Lynne Murphy. The English invented sidewalk in the seventeenth century and in 1693 John Dryden wrote the line, 'Or how last fall he raised the weekly bills.'

Perhaps we don't know our own language quite as well as we thought.

Murphy, an American linguist in Britain, dissects the myths surrounding British and American English in a laugh-out-loud exploration of how language works and where it's going.

'The first and perhaps only book on the relative merits of American and British English that is dominated by facts and analysis rather than nationalistic prejudice. For all its scholarship, this is also a funny and rollicking read.' * The Economist, Books of the Year *
'[Murphy's] delivery is sparkling, her approach mischievous, her material brightened by the unexpected...a potpourri of enchanting, counterintuitive surprises...The Prodigal Tongue is playful, funny, smart and often humbling...Murphy's prose is beguiling, and sprinkled with sprightly quotations...before the apocalypse, you could do worse than read Lynne Murphy's delightful book.' * Times Literary Supplement *
'Witty and erudite...what lifts The Prodigal Tongue is Murphy's deep learning, lightly worn, in linguistics and linguistic history...fascinating.' * Financial Times *
'A fun, practical and intelligent book which reminds us it's OK to say tomato both ways.' * The American, Books of the Year *
'Murphy ranges far and wide, with much wonderful detail and colour. She is particularly good on sport, manners, class and death, and her observations on food are fascinating.' * The Times *
'Murphy's book is pedantic, but for once the definition is positive: she gets things right, offers proof and skewers inaccuracy, and does so with wit and erudition.' * Daily Telegraph *
'A fascinating book.' * SORTED Magazine *
'Delightful... Murphy's great love for language radiates from these pages... Her examples are often funny and always apt...[her] book serves as an open-minded argument for tolerance and understanding.' * New York Times Book Review *
'Entertaining and sometimes gleeful...The Prodigal Tongue is ultimately a celebration of the richness and diversity of English.' * New Statesman *
'Fascinating and surprising...a witty and erudite celebration of the English language.' * i *
'Murphy has an amusing facility for zapping tired language myths... But the most striking feature of her writing is a fascination with the quirks of usage. She succeeds in her ambition to increase "our enjoyment of our common language and our pride in it".' * Wall Street Journal *
'The engaging, thoughtful and humorous approach makes for a readable and informative experience.' * Irish Times *
'[Murphy] writes with wit and flair, wearing her erudition lightly...a swell read.' * The Arts Desk *
'I love this book. Sassy but balanced, authoritative but fun: this is a must for anyone who fears that English is going to the American dogs.' -- Susie Dent, Countdown's resident lexicographer and author of Dent's Modern Tribes
'Finally, this emotional topic gets the hilarious, myth-demolishing and stereotype-smashing take it needed. As an American in London I couldn't stop talking about it with everyone I met.' -- Lane Greene, author of You Are What You Speak
'The Prodigal Tongue is great fun - impeccably researched and outright funny at the same time... Murphy is one smart cookie, or should I say biscuit?' -- Patricia T. O'Conner, author of Woe Is I
'The war of words waged between Americans and Brits has been filled with dour pedantry on both sides - which is what makes Murphy's book such a welcome and refreshing revelation... With wit and expertise, The Prodigal Tongue calls all English speakers home to a language big enough for both fries and chips, bumbershoots and brollies.' -- Kory Stamper, author of Word by Word
'No one knows how to navigate the transatlantic language divide better than Lynne Murphy. Moving beyond facile stereotypes about British and American English, she delves into subtle linguistic nuances with wit and aplomb. The Prodigal Tongue is a wonderful reading experience for anyone interested in understanding the true nature of these two distinct "nationlects".' -- Ben Zimmer, language columnist for The Wall Street Journal
'Forget the usual bumbershoots and lifts and lorries - Lynne Murphy's book on the difference between English in America and English in England is full of much more interesting things... You'll be chuffed as nuts on every page.' -- John McWhorter, author of Words On the Move and Talking Back, Talking Black