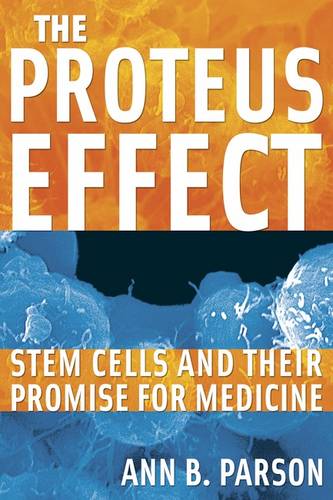 The Proteus Effect: Stem Cells and Their Promise for Medicine

Stem cells could be the key that unlocks cures to scores of diseases and illnesses, such as Parkinson's disease, diabetes, heart disease, autoimmune disorders, and even baldness. This title recounts the events leading up to the discovery of stem cells. It also explores the ethical debates.

Stem cells could be the key that unlocks cures to scores of diseases and illnesses. Their story is at once compelling, controversial, and remarkable. Part detective story, part medical history, The Proteus Effect recounts the events leading up to the discovery of stem cells and their incredible potential for the future of medicine.

What exactly are these biological wonders aEURO" these things called stem cells? They may be tiny, but their impact is earth shaking, generating excitement among medical researchers aEURO" and outright turmoil in political circles. They are reported to be nothing short of miraculous. But they have also incited fear and mistrust in many. Indeed, recent research on stem cells raises important questions as rapidly as it generates new discoveries.

The power of stem cells rests in their unspecialized but marvelously flexible nature. They are the clay of life waiting for the cellular signal that will coax them into taking on the shape of the beating cells of the heart muscle or the insulin-producing cells of the pancreas. With a wave of our medical magic wand, itaEURO (TM)s possible that stem cells could be used to effectively treat (even cure) diseases such as Parkinson's disease, diabetes, heart disease, autoimmune disorders, and even baldness.

But should scientists be allowed to pick apart four-day-old embryos in order to retrieve stem cells? And when stem cells whisper to us of immortality aEURO" they can divide and perpetuate new cells indefinitely aEURO" how do we respond? Stem cells are forcing us to not only reexamine how we define the beginning of life but how we come to terms with the end of life as well.

Meticulously researched, artfully balanced, and engagingly told, Ann Parson chronicles a scientific discovery in progress, exploring the ethical debates, describing the current research, and hinting of a spectacular new era in medicine. The Proteus Effect is as timely as it is riveting.

"The first convincing evidence that failing hearts can be repaired using bone marrow stem cells has been produced by a clinical trial, it was revealed yesterday. U.S. scientists compared two groups of heart bypass patients, with patients in one group treated with stem cells taken from their own hip bones. Six months later the hearts of the stem cell group were pumping out more blood than those of patients who had bypass surgery alone."