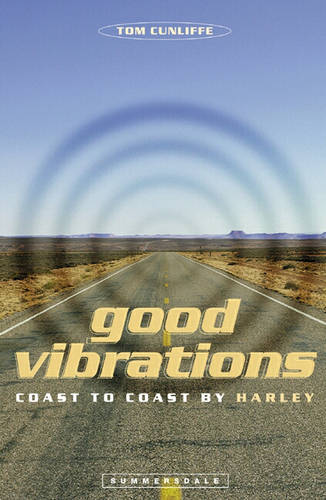 Two Brits astride the quintessential "dream machine", the Harley Davidson, describe a portion of modern America on their travels from trailer park culture to Psycho-style motels, an encounter with Hurricane Bertha and an eclectic collection of people from moonshiners, ol' blues men to hillbillies.

'A motorcycle the size of Roz's Betty Boop would have been beyond the dreams of the craziest pack leader at the Ace Cafe on London's North Circular Road in the monochrome days of rockers, Nortons, Bonnevilles and Marianne Faithfull, when 'good' was middle class, 'bad' misunderstood and the motorcycle offered stark hope to a generation of inarticulate searchers ...' Tom Cunliffe and his wife Roz take life in the saddle and on to the American highways and byways astride the quintessential 'dream machine' - the Harley-Davidson. Bikes Betty Boop and Black Madonna are chrome steeds for an extensive road-trip: from Maryland on the east coast to San Francisco on the west (and then back again), they thunder their way over the sun-beaten plains, through scorching Death Valley, neon Las Vegas, the deep South and everywhere in between. With flashbacks to the Sixties, the eclectic assortment of moonshiners, bikers hard and not-so-hard, cowhands, Sioux Indians, strippers, bible-bashers, war veterans, southern gents and the occasional alligator delivers a unique insight into the diversity of the USA. An easy-riding peepshow into today's America through British eyes and between the handlebars of the great Harley-Davidson.

''A pithy throbber of a book' ' Chris Stewart (Author of Driving Over Lemons) ''Good tomes for bikers are few and far between, but Tom Cunliffe's account of an epic trip deserves to battle for bookshelf space with Zen and the Art of Motorcycle Maintenance.'' Sunday Express ''There is only one way to see America and its people; chasing, finding and losing the real fantasy that is her dream, and that is astride a motorcycle ... Listening to Cunliffe ...you'll understand why.'' The Metro ''...one of the most fresh, raw and honest travel books I have ever read...throbs with all the verve and excitement of the open road...'' Irish Tatler ''Pure Magic.' ' Yachts and Yachting ''Funny, self deprecating, compassionate, shrewd, beautifully observed and subtly evocative, Good Vibrations deserves to be a classic in its own right.'' Cruising Magazine ''Brilliantly entertaining.'' Southern Daily Echo ''Book of the month: Two Brits astride the quintessential "dream machine", the Harley Davidson, describe a portion of modern America on their travels from trailer park culture to Psycho-style motels, an encounter with Hurricane Bertha and an eclectic collection of people from moonshiners, ol' blues men to hillbillies.'' The Book Pl@ce