When we heard at the weekend that John had died, Ethel immediately blurted out 'not John' as the news flashed up on her Twitter feed. It seemed to both of us that some of the joy had gone out of the world, and the subsequent extensive broadcast and print obituaries just confirmed again what an immense figure had been lost. Inevitably however they left out a few points which I think need to be made, so please forgive me for adding my voice to that of an already swelling choir.

I have been scratching my head as to how we came first to meet John. I know that Tony Good had got to know him when he was working to get the Wigmore community shop off the ground and John agreed to come to the opening. Or Edward may have run into him at the Ludlow Food Festival. However he first came into our orbit, he quickly became a staunch supporter of the bookshop and someone who I always felt was on our side. 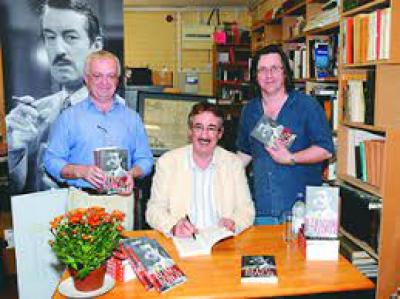 Over the years John came to the shop to launch various books, and from time to time would pop in to browse the shelves or to have a chat. He would also regularly retweet Ethel's tweets to his not inconsiderable number of followers about anything we were doing in the shop.

I particularly enjoyed the occasions when we worked with him and Carol  at the Ludlow Food Festival. On one occasion I spent an entire day with them and I still marvel at the stream of witty remarks that John could   make seemingly without trying.

And that is the first thing that I would like to say about him that I did not read in the obits. Unlike many comic actors and comedians, John was in real life extremely funny. And secondly his wit proceeded from the fact that he was a very bright person. John had an analytical mind and could, I am sure, have succeeded at most professions. He would have made a very good lawyer and could have run a company with ease. When you talked to John you always felt that you needed to be on your A game, not because he was a celebrity, but because you needed to be on it in order to keep up with him.

The third thing I would like to say is that John was extraordinarily community minded. I don't think that there is a cause in the county which he did not lend his support to: he constantly raised money for animal charities, especially the hedgehogs, and I believe his and Carol's effort's in fundraising also paid for most of an RNLI lifeboat. The work he did in looking after Wigmore Abbey and in replanting the garden would on its own have led to St Peter giving him a pass at the pearly gates. I am so glad that he worked with Peter Burden and Alex Ramsay to produce the Wigmore Abbey Book, as there is a permanent record of everything that was achieved there.

Fourthly I would have to say that John was also a tireless worker and someone who would never knowingly turn down a gig. I realise that having a 'Protestant Work Ethic' is not a very modern or trendy character trait, but it is one that I have always admired, and to hear John talk about his future programme always left me in awe of his extraordinary energy.

I would like to end with a story that I hope gives some insight into John's character. When he published 'Being Boycie', Edward was very anxious that we do whatever we could to promote it and arranged with John that he would come in to the shop on the Saturday of publication - which was I believe the 1st or 2nd of October - and sign copies. We advertised the signing widely in all the local papers and on local radio and all week we had an extraordinary number of telephone calls to confirm that John would be with us. Unfortunately, on the day of the signing the whole country enjoyed a totally freak heat wave - I subsequently learnt that it was the hottest October day on record - and as a result the anticipated crowds turned into an embarrassing trickle, as people sat in their gardens or headed to the seaside in the sunshine. John, ever the gentleman, kept cool in a linen suit, and was unstinting of his time and attention in welcoming those who did come - and on that day some people had travelled many miles to see him.

Two weeks later I was in Hereford killing some time whilst my car was being fixed and as I walked through High Town, out of nowhere a terrific thunder storm appeared and immediately soaked me to the skin. Looking for shelter I leapt into the nearest shop which turned out to be Waterstones. There, at a table surrounded by soaking wet people and umbrellas, was John, conspicuously not signing many books.

A few weeks later John came into the shop and I consoled him for having been the victim of not one but two freak weather occurrences. But typically John would have none of my sympathy as he had just got back from an very successful sales trip to North Wales where he had sold 200 copies of the book in Wrexham alone.

'They love me in Wrexham' he said, his words accompanied by a characteristic smile.

And who could blame the burghers of Wrexham for showing such good taste.