You are still always a child until your last parent dies

Yesterday morning in the early hours of Boxing Day my mother Joy Benson passed away peacefully at home surrounded by pictures of her family and holding her favourite teddy bear. I was with her in the house and I am glad to say that she went gently into the dark night that awaits us all. I was ridiculously pleased that she made it to Boxing Day as saying that a parent died on Christmas Day is one of the great conversation stoppers.

Over the last few months many of our regular customers have asked after my mother and I have been grateful for the concern they showed. and the stories that they have shared with me. At these times one always feels very alone and it is nice to hear that others have trod the same path before. I have particularly appreciated their dark humour, as at times this year laughter has been the only tool left in the armoury. Before I left this morning Ethel told me a joke that made me laugh. A man is walking down a street and he comes across a tall witch wearing a pointed hat and a mighty lion carrying a wardrobe. 'Whatever are you doing' the man asks. 'Narnia business',  the witch replies.

My mother led a long life and had a great many experiences including being a child during the war. She was married to two remarkable men. My father Arthur Swinson who was an author and television maker two of whose books are still in print, and my step-father Martin Benson who was an actor and director of some distinction. Perhaps most remarkably however - and something that will not be known by those who met her here in the bookshop - is that she was the founder and director of an extremely successful arts centre for young people in St Albans where we originally lived. Over the years I have met numerous people whose first appreciation of the arts came from one of the classes run at the centre. She devoted over 15 years of her life to the Arts Centre and I can think of no better way to spend one's time. In a sense many of the activities we have done here at Aardvark over the years find their origin in the early inspiration I got from watching her at work. She had a 'let's put the show on right here' type of ethic that I think I have inherited. I also inherited her beautiful hair which she retained to the end of her life and of which she was incredibly proud ( yes I am aware that at the moment I have more of it than is desirable and desperately need to wangle an appointment with Wendy at the Forge Hairdressers in the village).

2020 has been a year in which there has been simply too much death and dying. Every death leaves a hole in the fabric of our existence, and many of the people who have gone are simply irreplaceable. How to contemplate a world without the gentle humour of Tim Brook Taylor, the extraordinary jazz of Manu Dibango, or for that matter the classical beauty of Stella Tennant. One of the lessons life has taught me over the years is that many of the great and the good pass without one really noticing, but the death of other less publicly lauded  figures engenders feelings of unbearable loss. Only the other day I was talking with some customers  about the untimely young death of the great contralto singer Kathleen Ferrier who died a full decade before I was born, but whose loss many still feel deeply. I only have to catch a glimpse of  the faces of say  Les Dawson, Eric Morecambe or Arthur Lowe before tears start to well up. It is perhaps no accident that all of those whom I've mentioned above are cultural figures. In recent decades less and less attention has been paid to cultural matters in Britain, and yet it is our culture above all that defines us. Can  anybody not directly involved in politics name the current Minister of the Arts. Other than the dismantling of the BBC can any-one name a single government cultural policy. In writing this I do not seek to make a narrow party political point as governments of all political hues have been equally useless when it comes to suppporting the arts in this country

Fortunately for our nation there have been people such as my mother who took a different view and who dedicated their lives to enriching the cultural fabric of their area. Although I would not claim to have achieved anything on the scale of her legacy, I hope that in our events programme at Aardvark we have also been mini-camp followers in the caravan of cultural life.

Of those whose loss I have personally mourned this year, one of the hardest blows came this week when I learnt of the recent passing of Phil Rogers. Phil was so extraordinarily talented that when we held our great ceramics show some years ago an excessive amount of time during the setting up period was spent thinking about whose work we could place next to his. Phil belongs in a unique club of three ( with Bernard Leach and Ernest Francisco Fenollosa ) as people to whom the Japanese have turned for expertise about their own art and culture. He was an expert on the great Japanese potter Hamada, and a simply extraordinary potter of domestic and traditional ware ceramics - working in the Japanese and Korean tr 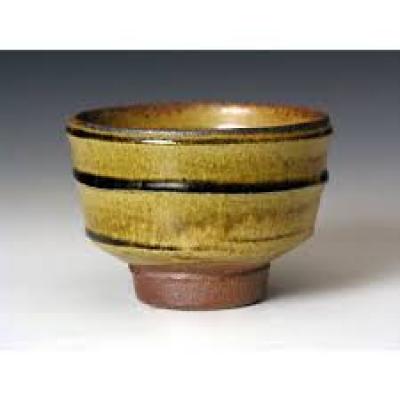 aditions. He was also I think I need to add at this point, an incredibly nice and decent man, who wore his own distinction extremely lightly. A couple of years ago I finally went out to visit him at the pottery at Rhayader and he was extremely generous with his time, and incredibly informative about his artistic process. I am extremely sorry that I never took up the standing invitation he repeatedly gave me to go and have lunch with him and his wife.

I have mentioned in previous blogs the pleasure that owning one of his pots has given me. His works are transcendent objects that gently lead you down so many different avenues of thought and appreciation. I weep for the pots that will now never be made, as well as for the wife and young son he leaves behind. His gallery Goldmark have a number of publications about Phil available,

But if I may I will end this blog by returning to the subject of my mother Joy. Perhaps the greatest present that she and my father gave their three children, was to be brought up in a house filled to bursting point with books. She loved poetry immoderately, and one of my first memories is of hearing her read 'The Owl and the Pussycat' to me and my sisters. She had a great love of Dylan Thomas also, of Walter de la Mare, John Masefield and many others. When we started our poetry programme here with Anna Dreda, I felt in part that we were following in her footsteps.

But if I may I will end with Dylan Thomas whom she loved above all other poets, and a copy of whose collected works featured prominently on her bookshelves:

And death shall have no dominion.
No more may gulls cry at their ears
Or waves break loud on the seashores;
Where blew a flower may a flower no more
Lift its head to the blows of the rain;
Though they be mad and dead as nails,
Heads of the characters hammer through daisies;
Break in the sun till the sun breaks down,
And death shall have no dominion.