Random Thoughts from Lockdown, 2
We have been spending much time and energy over the last week thinking about how to open the shop safely once the all clear (ha ha) sounds next month and we can welcome customers physically instead of just online and on phone. I have named this discussion ‘Project Stormtrooper’ in honour of the protective coverings we will have to wear to protect customers and ourselves. The thought of filling the shop with signs and directions has left me extremely depressed as they are the exact opposite of our ethos. Aardvark’s warm persona came originally from the character of my late colleague Edward who died in 2014. Edward had such personal warmth that even though he is no longer with us, his spirit remains 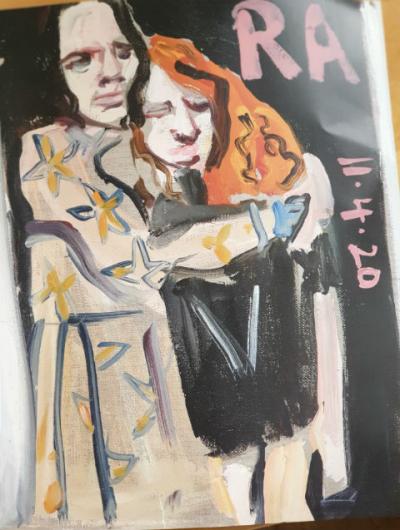 , imbuing everything in the shop with a particular vitality. I have been unsure how much of this spirit would survive into the new Covid era.

But this morning as I was walking Coco around a windy village green, I started to think about Kenneth Clark and what he did in the National Gallery during the war. Clark had moved the collection to abandoned mines in Wales. This left the building empty, and Dame Myra Hess approached Clark with the suggestion that she play a lunchtime concert in the deserted atrium. From then until 1946 Hess and her musicians played Beethoven, Mozart, Bach and Brahms to 3/4M people, continuing even during the worst of the Blitz. Later in 1942 Clark had the idea of presenting a single painting each week and many people flocked to look intently at each picture. And so I thought to myself even a reduced Aardvark can be worthwhile if we stick to our principles and offer it with love (as Edward would have done).

Yesterday R staged an intervention in the shop as I have been so obsessed with Neil Young recently that it has even started to depress her. The Fiona Apple CD I ordered has just arrived and I am under strict instructions to listen sparingly and under no circumstances to go anywhere near Nick Drake (step away from the Pink Moon). The Aardvark household has always had its musical no go areas (just as my parents during their marriage kept a lifelong ban on playing Monopoly and wallpapering) such as the 'no Jacques Brel' rule, but lockdown has widened the list of aural prohibitions. I am now avoiding Lhasa, Jeff Buckley, Piaf and Nina Simone (although I am going to exempt her version of ‘Brown Eyed Handsome Man’). I am writing this listening to Record Review which is featuring one of Schumann’s song cycles which will not be a hardship to give up (my romantic soul likes the idea of Robbie S, but musically I have always preferred the works of his wife following a concert at the official Edinburgh Festival I attended as a teenager).

This week at the shop has continued pretty much the same as previous lockdown weeks, with a multitude of online orders and an increasing number of telephone requests. Next week things are due to change as P is going to join us to help with the packing, thereby liberating me to be able to increase the speed at which I can work through the warehouse backlog. Our aim is to hold our July sale as previously (although sadly without the Jazz Brunch) and I am going to spend the next month or so ensuring that there are lots of bargains for people to enjoy.

The best thing that happened at the shop this week was that I got an email from one of the art publishers we work with, offering me a parcel of books. Having not bought any books for two months this made me realise how much I had been missing the joy of opening the boxes and finding new and surprising titles. One would have to be unusually unreflective not to have spent part of lockdown thinking about the life one has lived and what one misses. It has also made me think again about what it is that I like about being a bookseller. Think of the scene in High Fidelity in which Rob admits he would rather own a record store than be an architect, but without the criminally underused Iben Hjejle (come to think of it, why has one of the other stars of HF, the luminous Lisa Bonnet, not been offered more roles over the years?). I have come to the conclusion that the two things I most enjoy are the interactions with customers and the buying of books. It is not that I don’t love books themselves or reading, but the fact is that I will never be the kind of bookseller that my friend Anna Dreda was. Her close reading of texts and her skills at enthusing readers with her love of particular works, are attributes that I do not possess.

Speaking as I was above of luminous actresses, yesterday I found myself telling R about my love for Rivette’s ‘La Belle Noiseuse’ which features a wonderful performance from Emmanuelle Béart, who is simply the most arresting actress I have ever watched. I know of no other film that captures the difficulty of being a creative person better than LBN. There is also a subtle supporting performance from Jane Birkin as the painter’s wife - a marvellous under-rated actor. Rivette is one of the less well known directors of the New Wave, but alongside Rohmer, my favourite. Speaking of the NW I caught a fantastic edition of the Film Programme yesterday with a tribute to Agnès Varda, perhaps its only female member and the director of ‘Cleo from 5 to 7’ amongst other works. Also - something I hadn't realised - the wife of Jacques Demy (director of the ‘Umbrellas of Cherbourg’). She was particularly riverting on Goddard whom she revered but then fell out with.

Another thing that has cheered me up this week is that I got an email from the Algerian Coffee Store to say that they were re-opening to online orders. Needless to say they were immediately overwhelmed with demand (we ACS acolytes are a dedicated bunch!) and the first few times I tried ordering the site was closed again. But yesterday I got an email saying that they were taking a small number of orders at 11am this morning and I got my shopping cart ready and raced through the ordering process having been sent a special code. It felt like the scene in ‘Nick and Norah’s Infinite Playlist’ when the leads run round NY desperately looking for clues to where their favourite group (has there ever been a better band name than ‘Where’s Fluffy’) are holding a secret show. After a couple of failures when the system rejected the code, my name and my whole reason for existence, at last - success. I can already taste the organic Peruvian medium roast coffee, and most essentially the Osprey Lapsang Souchong, my stocks of which have become critically low. I have also added a pack of dark chocolate coffee beans for Ethel who has been finding the last week particularly hard.

So to end my highlights of the week I would like to add this morning’s reading of the Summer 2020 edition of the Royal Academy magazine (see jacket above). Under the circumstances it would have been a triumph to produce any magazine at all, but weirdly this issue is the best for years. A superb article on Ruth Asawa, Eva Jiricna on an Eileen Gray chair, a poem by Alice Oswald and so much more. If you are not a friend ask some-one who is to lend you their copy, or call the RA shop. Speaking of the RA a number of their exhibitions had just opened when lockdown came, and to alleviate our disappointment at not being able to see them they have prepared insightful online tours - one of which on their Picasso and Paper exhibition I watched last night. What a triumph that exhibition was, and what a tragedy that it was open for such a short time. I found out about the online tours from listening to an interview with Rebecca Salter on the ever excellent Art Newspaper Podcast. Also in the RA magazine are tempting adverts for an online exhibition of Lynn Chadwick’s work from the setting of his home that has been put together by the Pangolin Gallery, and a whole raft of new live films that have been produced by the ever inventive Goldmark Gallery on some of their artists. Such lockdown treats.

Finally, today I have a new Jean-Luc Bannalec Brittany murder mystery to start and despite the wind I feel myself warmed by thoughts of the French Atlantic coast which I have loved since I first came to know it in my early thirties. Speaking of France - and the west coast in particular - makes me inevitably think of wine and my ultimate highlight of the week - sipping a chilled glass of Muscadet made by the generous Michel Delhommeau at his homely chais in Monnières, south of Nantes. Up until about 15 years ago I shared the typical British disdain for this grape - bad examples of which were a staple of trips to restaurants in the 1970s a - but I came to know it again in its original homeland of Burgundy where is is known by its true name Melon. Like many of the lesser grape varieties in France, it holds extraordinary promise and in the hands of dedicated makers becomes an elixir of the gods. When we drove in to see Monsieur Delhommeau last year he was having a very difficult time. The weather in 2019 had been uncooperative and he had lost over half of his crop to a disastrous frost in April. Also he had managed to cut his hand very badly when pruning the vines and had a huge bandage on his right arm. Needless to say this did not stop this prince amongst viticulturists from opening bottle after bottle for us to try, even running out to the car as we were leaving with a present of one of his sparkling wines. This week, having had an hitherto alcohol-free lockdown I finally weakened and opened a bottle of his sublime 2010 special cuvée. It tasted divine, and amazingly even improved a little the next night when I shared a glass with Ethel over the magic of FaceTime. Courage mes braves, all is not lost in a world where such domestic joys are possible.

Back from Mental Spring Cleaning and raring to go

A New Year and sooo much to do; 17th-21st January Bookshop closed

Christmas greetings and some sad news