I had hoped to be able to manage a blog on a weekly basis, but last week I was so tired that I spent Saturday in a near coma on the sofa, dozing and half-listening to music. It is a strange part of the CV experience that one needs to constantly find new ways to cope. It is like a jigsaw puzzle that can never be finished. Or if you are of a literary bent - which you probably are if you are reading this blog - Tantalus in the Inferno. Normality is always just that little bit out of reach. Meanwhile those who claim to lead us seem like just so many minor characters from the Commedia dell’Arte (maybe Pantalone?). I have taken to watching parts of the daily briefing without the sound. I find it reveals more of what is actually going on.

As Monday - the date from which non-essential shops can re-open - approaches, the number of calls from people wanting to know when we will be open again has increased. We took the decision some time ago to re-open in the week of the 6th of July, although we are yet to work out our exact opening hours which will be different from previously. Ethel will be posting full details on the website and on our various social media feeds. Many many best wishes to our brother and sister booksellers who are re-opening tomorrow. Please support them with your thoughts, prayers and most importantly your wallet.

One date that I can reveal is our first ever Aardvark Car Boot Sale which will take place on Bank Holiday Monday 31st of August. Sadly in a world of social distancing we cannot run our usual flea markets, but I think we can safely do an outdoor car boot. We will be using the car park and the field opposite and so there will be plenty of room. If you would like to take a pitch give us a call. I will hope to have live music and there will be outside food. With all the local events cancelled I have been feeling a little sad, and this is our response. If life gives you lemons.... and actually if anyone wants to bring home made lemonade that would be great.

I have been spending quite a lot of time recently going up and down to the Royal Shrewsbury Hospital, and each time I go I marvel at what a truly horrible series of buildings the hospital is housed in. It reminds me of a comment that an American tourist once made to me in the Scrovegni Chapel: ‘Why do they have to make these places so goddam gloomy!’. Years ago I worked with an American publisher called Patrick of whom I got very fond due to his very laconic Southern sense of humour. He it was who explained to me the complicated process by which US universities admitted promising sports people on athletic scholarships (they are given a mirror and are admitted if they can make it go foggy). Patrick came from a poor background and paid his way through college by spending his summers pouring concrete on construction sites. He explained to me the different ways that concrete can be made, and what it costs to make really well made concrete buildings. We were in Finland at the time - the country of Aalto and the Saarinens- which has a climate that is not dissimilar to ours and which somehow avoided many of the mistakes we have made with the medium.

I have been finding it hard to concentrate and as a result my fiction reading has been lamentable. Why it is that I have managed to read the Times, New York Times, Guardian, New Yorker and many other daily and weekly publications, and yet not been able to read a whole book is beyond me. This duck has however been broken by the new Sara Paretsky novel "Dead Land". I can already tell 50 pages in that it is not going to be a classic, but even medium SP is so much better than other writers' best offerings. Always a pleasure to be in such good authorial hands. Also spent too much time re-reading the essays and looking again at the illustrations in the RA Picasso catalogue. The standard of their productions is always really high, but this one is outstanding. Great choices of paper and great reproductions (not easy with drawings).

Speaking of the New Yorker, I have been reading each issue cover to cover (always for some reason starting at the back) and this week’s issue has a great short review by Peter Schjeldahl of a new Hopper show in The Beyeler Foundation in Switzerland. He is not a critic with whom I always agree, but he is some-one who I always enjoy reading. On Hopper he pulls out a number of parallels and facts which had not occurred to me.In particular he points to links to Courbet that I had not thought of before. He also makes the point that Hopper’s buildings are always self-portraits. He talks about Hopper’s debts to European Romanticism and Symbolism, and I had thought before that the only other artist who captures the same piercing solitude is Casper David Friedrich. And then I wondered whether there was something of Redon in the dreamlike quality of Hopper. Schjeldahl makes a very telling parallel to Hitchcock and the way in which they would both storyboard their works. Finally he talks about Hopper’s politics - strongly against FDR and almost Randian - and his influence on De Kooning which I had not been aware of. All in all a model of what a short review should be.

Lockdown has increased my consumption of trash TV and it has made me think about what makes the perfect disposable viewing. I am not talking about truly great shows like Justified or Friday Night Lights or the Wire or for that matter The West Wing (which Ethel has just started watching having been sent the complete set as a very generous lockdown gift), but the lesser everyday studio fodder. My rules for series that make the cut are: 1) there need to be enough episodes to be worth investing in the characters, 2) the actors need to better than the material. 3) the writers need to be able to manage plot development without just getting silly (no musical episodes, no time travel, no lost identical twins). And finally most importantly the characters need to develop. So series that make the cut on these criteria include Rookie Blue, Unforgettable, Republic of Doyle, Blue Bloods, and Grimm. Series that fail include Lie to Me, Quantico, Trust Me and too many others to mention. Some great series only made it to one outing which is frustrating - whoever cancelled The Dresden Files you know who you are. Truly great TV is always rare but if you have a liking for sci-fi I would point you towards The Expanse which has a panoply of superb actors and is based on the peerless novels by James Corey. Also Lucifer is coming back shortly apparently so there is plenty of time to catch up on the first four series. The first series was shot in Vancouver before production was moved to LA and strangely the later series do have a more gothic feel. 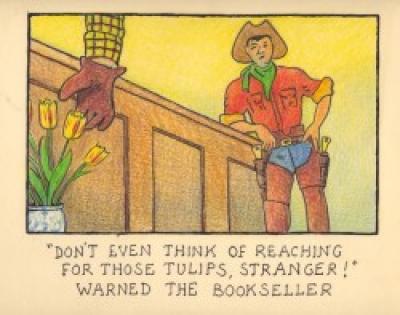 with me on keeping Aardvark going and readying the building for re-opening. Her cultural recommendations are always great and it is down to her that I have signed up for the Hay Player which is quite simply the best possible use of £10 imaginable. So many great historical recordings, and this morning I finished listening to the great Hay session with Glen Baxter from a few years ago. Baxter has been a hero of mine since I was first introduced to his work by a friend at university in the Eighties. I had always wondered where such an intriguing artist came from and had speculated on his influences. This talk makes it clear that he came from an art, not a graphic art or cartoon background, and that his is a very European talent influenced above all else by surrealism and particularly Breton. Also key to his emergence was Edward Gorey and the Gotham Bookmart. I found the GBM by accident when wandering around New York in the late 80’s and as a customer who knew nothing of its history or Gorey’s connections I found it both glorious and infuriating - it was one of those bookshops where as a customer one always felt something of an interloper, or an outsider witnessing an in-joke. It had a brilliant metal sign outside that said ‘Wise Men Fish Here’. Like many of the great New York Bookstores (where are you, Scribners when we need you most?) it is no longer with us having closed in 2007, but its legacy lives on.

Ethel tells me that I write too much so I am going to bring these thoughts to a close. We are starting to think about life after lockdown so if you have books or libraries to sell, get in touch. The world will have need of good books if we are ever to make it back to the before time. Until then I leave you with this classic Baxter image.

Thanks for 'Presence of Absence' , More Books, Aardvark Books Sale

Busy Week, Tickets for Presence of Absence, June and staying in the area

Morning of the Car Boot Upon Us. Poetry event and extra exhibition, fantastic books