A breathless week in which the days flew bye , and I found myself coping with my varying emotions with different degrees of success. On the one hand we had a stream of calls, emails and personal visits asking when we were re-opening which gave all of us a lift. On the other hand working through the various government and Booksellers Association guidelines for post Covid book retailing brought home to me how much has been lost. You are not in Kansas anymore Dorothy.

This is the last random thoughts from lockdown, but what to call the next phase we are moving into. After various ideas I have decided to mentally label it the ‘between’ time. Many cultures have stories and legends of between states. In some there are palaces and gardens, in others tales of Succubi and Oneiroi. Who knows which we will confront us but I know which side I would bet on ( if I were a betting person).

This week I also carried out my first house clearance since lockdown. Pat whose house I cleared was a wonderful person and a loyal customer over many years. It was a privilege to work through her books, many of which she had bought from us. Also this week I had an email from a friend of a former customer who died in 2016. Mary and her husband Paddy were loyal customers of oursand great supporters of H.art and of community arts in general. Her son had found something I wrote about her and shared it with her friend, and this lead him to get in touch. Having now run Aardvark for over 16 years inevitably we have had to say goodbye to many long-standing customers ( and my friend and colleague Edward). Book lovers are a 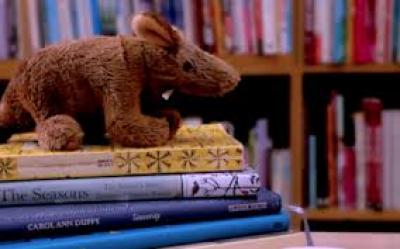 n eclectic and passionate bunch and it has been a privilege to meet and get to know so many interesting people.

Whilst I am writing this listening to a Record review rewind on a Bartok concerto, in general this has not been a week in which I have listened to much music - the only exception being a Courtney Pine crossover album ‘Resistance’ which showcases many of his strengths and which I haven’t played for many years. We heard CP around the time he recorded this album and I realised that this copy was signed to us. How I yearn to hear live music again. Sadly this year’s Presteigne Festival is to be digital only, which is a great consolation but also serves to confirm what we will be missing out on.

As I walked Coco this morning I realised for the first time how laden with apples the trees on the green are. Autumn will bring fruitfulness, and I am torn between feellings of wonder and sadness ( the classic cherry blossom cocktail) .Today’s Guardian includes a wonderful piece by an Italian writer on what the between time is like in her country - complete with a photograph of a mask wearing waiter serving coffees outside Florians in St Mark’s Square.

Elsewhere in the paper a piece on uncrowded parts of France sings the praises of the area around Sancerre. Ethel and I spent our first holiday after Edward’s passing staying on the edge of La Charité sur Loire a French book town in the west of the Loire, which is dominated by the ruins of a massive abbey. A few miles from Sancerre and Pouilly, it is a wonderful place with marvellous food - including superb goats cheese from Chavignol, and dry white Sauvignon that is austere and yet which has great depth of flavour.

Sancerre is unusual amongst classic French wine areas in only enjoying its current level of popularity since the war. Enterprising growers started a campaign of selling wine to Paris restaurants, and the rest as  they say is history. Along with the wines from St Bris in northern Burgundy this area produces the best French Sauvignon - which notwithstanding the fantastic sauvignon’s from New Zealand, Sonoma Valley and South Africa - is to say the finest Sauvignon on the planet. In my mind I see this wine as the perfect dreadnought, cutting through whatever you drink it with, but also perfect on its own. I have drunk it with fish, as an aperitif and even with Spring lamb. If it is not my favourite grape variety then that is because of my natural love an under dog. My heart belongs with the mongrels like Gamay, Pineau D'Aunis, Carignan or Melon. And with the grapes which consistently disappoint - you know who you are Pinot Noir, Riesling and Cabernet Franc - but which when right are so compelling that they make you want to cry.

Last week Ethel and I shared a bottle of Rasteau - delivering part open bottles of wine across the garden fence has become a strange feature of my lockdown experience. This is a wine that I first encountered in the eighties when it was a humble Cotes de Rhône Villages. I bought a bottle in the old Victoria Wine in Leominster and it was a total revelation. Similar to, but more fleet of foot than, Chateauneuf or Gigondas. Over the years I have tried many other bottles of Rasteau and in the main they have disappointed - I suspect that their cuvées contained too much Mourvèdre and not enough Syrah - but this bottle was just perfect.

Thinking about Leominster I heard this week that Brightwells - still known to old lags as Russell Baldwin and Bright - is ending it's fine art sales and closing its  Leominster showroom. The company is moving to a site near Hereford where they will concentrate on cars and wine. For all the decades that I have known Leominster it has been known as an antiques town, and whilst the number of shops and dealers has fluctuated, RBAndB has always been there anchoring the trade for many decades. Alas no more.

So farewell lockdown and hello  brave new world. If you are passing Brampton Bryan - and yes incredibly people do - or are simply suffering from book withdrawal, then do come and see us from Monday. After the opening week we will be open Tuesday- Sunday from 10am to 4pm.