Robert Frost was a great poet but not always right

O hushed October morning mild,
Thy leaves have ripened to the fall;
Tomorrow’s wind, if it be wild,
Should waste them all.
The crows above the forest call;
Tomorrow they may form and go.


This is from one of Frost's best known poems on autumn, but looking out of the windows in the bookshop this morning I have to say I am not so sure his enthusiasm is quite so warranted. November can be a grim month and we are in for a weekend of extremely grim weather by all accounts.

I have been thinking about Frost a lot recently as I have been wondering about what sort of inauguration President Biden will have in January (that is if the normal transfer of power is allowed to take place at all).

Famously JFK had Frost read a special poem -  'The Gift Outright' - in the driving cold and snow. It makes for a very compelling visual, the ageing poet and the young beautiful president. It is a very deep poem which I won't seek to unpick, save to say that it is a poem of a people who came to another's home and made it their own. It is a poem, which for all its undoubted beauty, makes uncomfortable reading for any-one who has read 'Bury My Heart at Wounded Knee' ('She was our land more than a hundred years/Before we were her people. She was ours/In Massachusetts, in Virginia,/ But we were England’s, still colonials, ...').

And no I am not saying that we can no longer write or create art about the experiences of those brave fugitive peoples who fled religious intolerance and persecution in the old world, hoping for a new world where they could live free from suffering. Even as we seek to make at least some amends for the impossible losses of Native American peoples in North America, Australasia and beyond, we can still celebrate the lives of those who began the process of their disenfranchisement.But we can and must not pretend that there is only one narrative, or talk unthinkingly of 'discovering' a part of the planet that had been home to others for millennia.

All wrongs cannot be righted but in the case of inaugural poetry we have a chance to make a very minor redress. I would very much hope that the current American Poet Laureate Joy Harjo - a member of the Muscogee Creek Nation 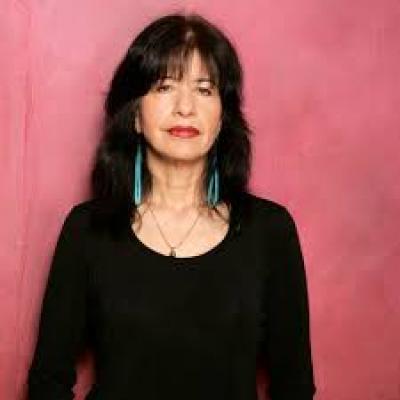 be asked to read on the great day: to tell the part of the story that Frost left out. I attach an extract from her most famous poem below. If you have time between now and January 20th I would urge you to read the poem. It made me cry - part in a good way, part in a bad way - but tears have come easily to me in recent weeks and you may be made of sterner stuff.

She Had Some Horses

She had some horses...