Little Women is great and Greta Gerwig is fab

Yesterday I had my second day off in a week (it felt like I needed it) and spent it finishing off the three quarters of Bill Buford's new book 'Dirt' that I hadn't read (for some reason I put it down and it got buried), and watching the recent Greta Gerwig film version of 'Little Women'.

To start with the latter first, in general I really enjoyed the Gerwig version of Alcott and it has so many highlights that it is difficult to pick one. This is the first version I have seen in which the character of Amy really emerges and it becomes almost a twin-focussed work. Timothy Chalamet is great as Laurie, Saoirse Ronan is incredibly 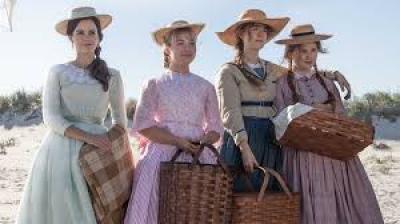 watchable as she always is, and what a pleasure to see Laura Dern again (although I could have done with much more of her). On the negative side I don't like the post-modern ending, I think there are several too many flashbacks, and on my television the natural lighting was sometimes the wrong side of murky (I understand that this wasn't a problem in the cinema). Overall a really great film, although I just about prefer the Susan Sarandon/Winona Ryder version from the 1990's.

'Dirt' is Buford's attempt to understand the wonderful food and life of Lyon which he wrote having spent 5 years living there from 2008 onwards. The book is superbly well written - as you would expect from Buford whose work I have enjoyed in the New Yorker over the years and whose earlier books I have also read. The scenes involving 'Bob' the bread maker are wonderful and the best thing of his that I have read, and the book maintains an elegiac quality which I think is justified. So much of what made food in France wonderful has been disappearing to be replaced by ever more hypermarché and prairie fields. On the negative side, I think that his excuses for inaction when witnessing bullying in the kitchens he worked in are fairly thin gruel. Personally I don't think that this is a feminist issue as I would have thought that the kinds of behaviour he describes are inexcusable when directed at anyone. Also, how on earth did they afford to give up both jobs and move to Lyon where they both then worked or studied unpaid for several years! You don't have to be a paid-up Marxist to think that a little more honesty on the money would have made the book seem more real.

Finally, if you have not seen them I would absolutely recommend Rick Beato's musical analyses of great rock and jazz records. I have now listened to his explanation of The Police's 'Every Little Thing She Does is Magic' and I think I now understand why I have always loved that song. That came from a period when Sting's creativity was extraordinary and in Andy Summers and Steward Copeland he had musicians who were talented enough to make his ideas real.

Back from Mental Spring Cleaning and raring to go

A New Year and sooo much to do; 17th-21st January Bookshop closed

Christmas greetings and some sad news